Two more steps on the path to world domination.

Two very, very cool things have happened for VICIOUS in the last week, aiding my little supervillain book in its climb to world domina–I mean success.

First, last week, Publishers Weekly named VICIOUS one of the Best Books of 2013!!!!

I was shocked and humbled, to say the least, and really, really excited.

I woke up this morning to learn that VICIOUS had made the official ballot in the Goodreads Choice Awards. I was completely speechless. 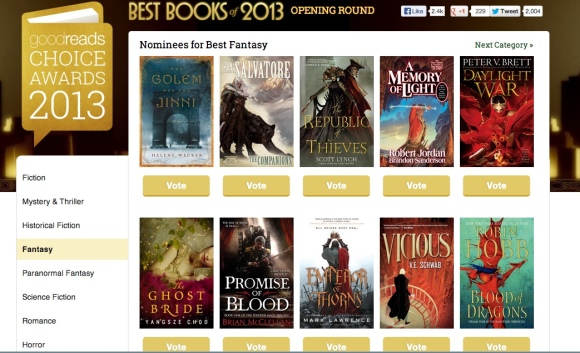 I just can’t even. You can’t see it in the screenshot, but I’m in that category with Neil Gaiman and Brandon Sanderson.

If you want to go vote, you can click HERE.

I know I’ve said it before, but I have to say it again. I’m not lying when I say that every step counts. Every review. Every purchase. Every tweet. Every spread word, and shouted word, and whispered-in-a-library word. It all counts. Some books come into the game with hundreds or thousands of voices already behind them, but most come with only a few, and if they’re lucky, those few are loud.

I have felt so very lucky, because even when VICIOUS did not have many voices, those voices were loud. They continue to be loud. And people seem to be listening.

Thank you to everyone who takes the time to be a voice, because I hear them, and others hear them, too, and it really does matter.

5 thoughts on “Two more steps on the path to world domination.”