I like that quote. I’m thinking of starting my posts with quotes. There are just so many wonderful ones out there. You can’t really have enough quotes in your life, can you? 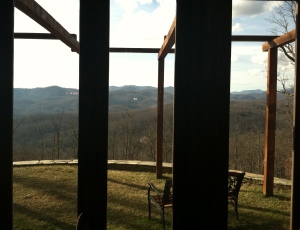 …resting and thinking and hiking and editing (mostly editing).

And now I’m back, and I come bearing a few baubles.

1. THE NEAR WITCH + SIBA EQUALS WOOO.

So I was in the car with Carrie Ryan, on our way to a signing, when a friend sent her an email letting her know that the conclusion to her epic trilogy (The Dark and Hollow Places) had made the SIBA long list (SIBA takes in nominations from southern independent booksellers and their customers, then selects the top ones for its long list, and from there selects finalists and a winner). And then Carrie turns around and says, “Hey V, you’re on here, too!” And I was like “?” And so she sent me the link and I was so thrilled to see that Caroline of the incredible Malaprops store in Asheville nominated THE NEAR WITCH!

This thing is epic. And really, what I mean is EPIIIIIIIIC. Except with, like, 100 more I’s, because I think there are about 100 more authors involved. And this year I’m lucky enough to be involved, too!!! To see the FULL list of events (because its epicness is of the scale that would break my blog, go HERE. But below are the events I will be doing!

3:50-4:40: No Ordinary Love: How to Create a Satisfying Love Story and a Satisfying Supernatural World at the Same Time

You guys, that little signing list above is like 1/5 of the number of authors that will be at BoW.

I’m going to have to go save all my money. And then make some more money, so I can buy ALL THE SHINY BOOKS. *digs under couch cushions for change*

I just needed to get that off my chest.

But March is cool, yo. And on the 15th, I’ll be able to share my second NW paperback secret!!

I guess that’s all I have to share today.

I was going to finish up this post here, but I felt like it could use a little more cowbell. But when I looked up photos, all I got was Will Ferrell in a too-short shirt, so I thought I’d give you this instead…

Sunday is for sharing songs!!

I have a few “real” posts I’m working on, but I’m finishing up edits over the next couple weeks, and am thus in my cave. But since Sunday posts are usually made of less articulate stuff anyway, let’s roll with this 😉

I’m normally the one asking for music, so I thought today I would share some instead.

This lovely winter Sunday morning, I am sharing my running mix.

That’s all the songs on this particular mix!

Hope you have a splendid Sunday 🙂