Hello, lovelies! I’m sorry I’ve been so absent here on the blog. I’ve been drafting OUR DARK DUET, preparing for the CONJURING OF LIGHT launch, and safeguarding what little sanity I have left against the dregs of this horrific year.

I’ll have a new post in a few days about 2017, and what’s on tap on the book front, but in the meantime, I come to you as a reader, not a writer.

I didn’t set any particular goals for the year–I simply reached for what interested me at the time.

81 were fiction and 22 were nonfiction. Only 30 of them were new releases, proving my reading tastes are as ornery as ever.

Rivers of London by Ben Aaronvitch (2011)

Every Heart a Doorway by Seanan McGuire (2016)

The Glass Castle by Jeannette Wells (2005)

The Library at Mount Char by Scott Hawkins (2015)

Roses and Rot by Kat Howard

Visit from the Goon Squad by Jennifer Egan

Smoke Gets in Your Eyes by Caitlin Doughty

More than This by Patrick Ness

This is the second year I’ve set a goal of 100 books, and the second time I’ve managed to reach that goal, so I’ll be setting the same one in 2017, with the hope of seeing a higher percentage of PoC and LGBTQIA on my end-of-the-year report. It won’t be hard, since there’s a wealth of wonderful work hitting shelves.

Give me your children…’s book suggestions.

I have the idea. I know the story. But I feel like my exposure when it comes to MG is perhaps a bit lacking, and so I turn to you, dear folks.

Give me your brightest.

Give me your best.

Give me your morbid and whimsical and splendid.

Leave your offerings in the comments.

It occurred to me that it’s been awhile since I did a post of *my* shelves.

Since I hadn’t yet taken photos for the SHOW ME YOUR SHELVES project, and since I am presently incapable of coherent blogging due to the hell that is first-round edits, I am giving you a shelf/to-read/oh my-god-I’ll-never-make-a-dent-in-this update.

This is one of my to-read/currently reading piles: 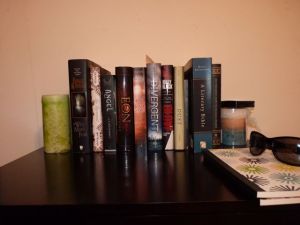 The top shelf is to-read, the rest are read and favorites, with the bottom shelf being journals:

This set of shelves is MOSTLY all read: 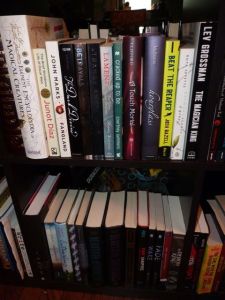 And lastly: the shelves in the back area are all read:

I cringe to even ask, since my current to-read total exceeds my age, but…

Anything I should add to the stacks?

Judas, Reindeer on Mushrooms, and Other Adventures.

I hope you have all been consuming unhealthy quantities of holiday sugar.

In Victorialand, I have a new electronic minion. Meet Judas, the Kindle. 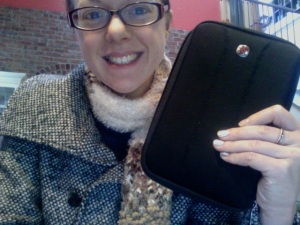 He was my Christmas present because I have been told by the powers that be that trying to haul dozens of books around Europe while constantly amassing more would not be compatible with a semi-nomadic lifestyle.

Judas’s primary purpose is to read the 23456754 classics that I have decided I should read both for grad school prep and for my general betterment.

In other news, upon completion of my family’s annual Christmas Eve reading of “Twas the Night Before Christmas” my mother ended the poem and then uttered the following line:

“And then Santa got high on some psychedelic reindeer piss.”

I will allow a moment for that to sink in.

It is all because of northern Swedes known for wearing big red coats and raising reindeer who feed mostly hallucinogenic mushrooms. The men then drink the urine. Their homes also have holes in the roofs, and they descend into them that way. So. Yeah. That probably doesn’t make the above statement any less odd.

I’ve gone back and forth on doing “Best of” posts, and in the end I decided not to. I couldn’t narrow anything down, and just ended up playing solitaire and text twist, as I do when any important decisions are involved.

If you want to see my favorite books of the year, head over to my Goodreads page and look at the 5 star reads 🙂

Then there are the “Looking Forward” posts, which I find just as hard because every time I think “Oh it’s almost 2011” by brain makes this odd SQUEE sound and I have to reboot with cookies. So the forward-looking posts resulted in the same lack of productivity.

In the end, I leave you with this.

2010 has been an incredible year, complete with highs and lows. I spent the entire first half of 2010 doing edits for THE NEAR WITCH. I spent the entire second half recovering from those edits, and writing the next book. I made some trips, I changed agents,

And the next time I post, lovelies, it will be 2011 (aka THE YEAR OF THE WITCH…I so did not just make that up. I swear. It’s a statistic or something, so it MUST be right).

Damsels, BAMFs, and the Gap Between.

Can we talk about something?

Damsels. Those often-in-distress fair maidens. Not just Damsels, but their opposites, the ANTI-Damsels, too.

There’s this thing. A gap, if you will. A gap where there should be a spectrum. At one end, we have the
Damsel-in-distress. At the other, the Anti-Damsel.

Other end – will break you.

Now, lately — and perhaps in response to earlier damsels — there have been MANY an Anti-Damsel. I automatically think of Cashore’s female leads, Katsa and Fire, as anti-damsels (I almost put Katniss Everdeen here, but I actually wouldn’t put her at the extreme end of the spectrum due to the way she changes over the course of the series).

But what about the gap? That space between for a more HUMAN breed?

My main character in THE NEAR WITCH is not a full-blown BAMF Anti-Damsel. She is maybe a 7.5 on the Damsel Anti-Damsel spectrum.

I think of the lead in Lauren Oliver’s latest novel, DELIRIUM, as a really wonderful 5 on that same spectrum. Right in the middle. She definitely has Damsel-like qualities, and yet she EVOLVES.

And I love it.

That’s something I want to see more in books, or maybe I’m just not reading the right books (I’m trying, to be fair, I’m VERY behind on my TBR pile). Because I think that Anti-Damsels are much more uncommon than Damsels in life.

Some people (and we’d like characters to resemble, at least mildly, people, yes?) start out sheltered, or lost, or weak (in one way or another) and BECOME stronger through experiences. I think it’s far more interesting when a Damsel evolves beyond those weaknesses and dependencies. Instead of just growing toward a LOVE INTEREST, I like to see Damsels growing out of their shell, growing toward a healthier, stronger version of themselves.

Don’t get me wrong, I LOVE the BAMFs. Readers want to be them, to disappear into them.

People love a superhero, and end up playing with action figures of them, or wearing their outfits as Halloween costumes. They don’t aspire to actually BE them. Probably because superheros, like BAMF Anti-Damsels, are too far removed (yes, it’s escapism). But when we as readers find a main character who LEARNS — and not only how to defeat the bad guy and save the day, not only how much they care about their love interest — but learns more about THEMSELVES and their world, and adapts, becomes stronger because of it…those are the characters I read about and want to be.

To me, they are even more compelling.

Anyway, just my thoughts…It’s Friday, so who knows how coherent they are.

Do you have any leading ladies you love? Where do they fall on the spectrum?